Guest Post - Incest: Keeping it in the Family by Billierosie

I would like to welcome Billierosie to my blog for a Guest Post! If you would like to read more from her, you can check out her blog!! 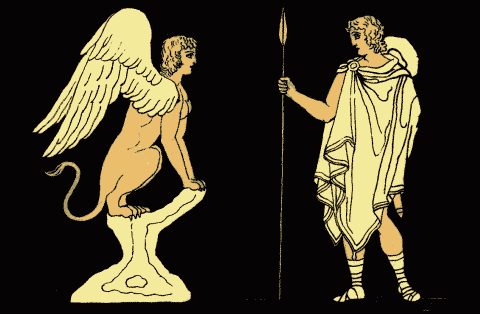 Incest: Keeping it in the Family
Incest. The final taboo. It is taboo, as far as I am able to ascertain, in every society on the planet. The exceptions to the rule appear to be royal dynasties, in particular the ancient Egyptian Kings and Queens.

We’ve heard of Freud’s theory about the Oedipus complex: it is the famous Greek tragedy that the theory is based on.

The writers of the Greek myths warn of what will happen if we break the taboo. If we embrace the depravity. Sophocles, Aeschylus  and Euripides have all dramatised the story.

Most writing on Oedipus comes from the 5th century BC, and the stories deal mostly with Oedipus' downfall. Various details appeared on how Oedipus rose to power. Here is the outline of this powerful tale.

King Laius of Thebes, heard of the Sphinx’ prophecy that his son will kill him. Fearing the prophecy, Laius pierces his baby son’s feet and leaves him out to die, but a herdsman finds him and takes him away from Thebes. Years later, Oedipus, the grown up son, hears a similar prophecy, applied to himself, and not knowing he was adopted, leaves home in fear that he would kill his father and marry his mother. Laius, meanwhile, ventures out to find a solution to the Sphinx' riddle. As prophesised, Oedipus crossed paths with Laius and this leads to a fight where Oedipus slays Laius and most of his guards. Oedipus has killed his father. Oedipus then defeats the Sphinx by solving a mysterious riddle to become king. He marries the widowed queen Jocasta, not knowing she is his mother. After many years of prosperity and conjugal bliss, a plague falls on the people of Thebes. Upon discovery of the truth, Oedipus blinds himself and Jocasta hangs herself. After Oedipus is no longer king, Oedipus' sons kill each other.

Sophocles’ “Oedipus the King”, has the Chorus, screaming out Oedipus’ crime. The audience, having seen the horrific tragedy unfold, has been anticipating this moment.

“O Oedipus, name for the ages --
One and the same wide harbour served you
son and father both
son and father came to rest in the same bridal chamber.
How, how, could the furrows your father ploughed
Bear you, your agony, harrowing on
In silence O so long?

But now for all your power
Time, all-seeing Time has dragged you to the light,
Judged your marriage monstrous from the start --
The son and the father, tangling, both one --
O child of Laius, would to god
I’d never seen you, never never!
Now I weep like a man who wails the dead
And the dirge comes pouring forth with all my heart!”

The Chorus laments Oedipus’ crime. Just because he didn’t know that Queen Jocasta was his mother, he is still guilty, and the Chorus damns him in their profound disgust. Jocasta hangs herself. Oedipus puts out his eyes with pins from her brooches.

“But Oedipus’ destiny still moves us, only because it might have been ours — because the Oracle laid the same curse upon us before our birth as upon him. It is the fate of all of us, perhaps, to direct our first sexual impulse towards our mother and our first hatred and our first murderous wish against our father. Our dreams convince us that this is so.” Sigmund Freud. “The Interpretation of Dreams.” 1901

Fast forward millennia. “Brookside” 1996: A British Soap, famous for its challenges to our views. The incest storyline, in which brother and sister Nat and Georgia Simpson were discovered in bed together by their younger brother, is described by Phil Redmond, the producer, as “breaking the last television taboo.” It was so shocking an MP urged viewers to complain "in their millions".

One perceptive student says; “We tried to discuss the incest storyline with teachers at school. I think they were thoroughly disturbed by what we were watching as one encouraged us to watch "normal" television. I suppose she meant games shows.”

Another student says; “I think the problem with this storyline is that it came at era where society was just not ready. Not suggesting that they’re ready now, but consensual sex between family members back in the 90’s wasn’t seen as effective story-telling, let alone talked about. Now however, you have to look at the latest magazine on the shelf and there is probably some true life story about GSD (Genetic Sexual Disorder). As ludicrous as that sounds, it exists. Usually it’s contrived, so that the two people of the same genetic family meet as adults, not where they grew up together like Nat and Georgia did.”

Here’s the episode “Family Therapy” from the Soap, “Brookside”. Okay, it lacks the sophistication of Sophocles, and it certainly does not conform to Aristotle’s concept for tragedy as discussed in his “Poetics”, but in its way, it is more effective for today’s TV generation audience. It is more accessible.

As far as I can remember from the TV soap, Nat and Georgia move away from Brookside Close, to live out their lives happily and anonymously somewhere in the south of England.

Nothing adds that certain flavour to a storyline like a romantic or sexual attraction between siblings. Most of the time it may be merely implied, but sometimes it's laid out right in the open for the viewer to see. Its presence in a story usually adds a great deal of emotional intensity.

Frequently, actual incest is avoided through the device of siblings who aren't really — they're fostered, or step-sibs, or adopted. Thus, while in arbitrary terms of relationship they may be brother or sister, in "true" terms of blood they are not, and may pursue their chosen target with relative impunity. Often it's just an extreme version of the Childhood Friend Romance set up; male and female characters who normally couldn't cohabitate or possibly even interact normally with each other are 'forced' to but meet with an arbitrary contrivance preventing them from developing past it. The only difference is that the audience is more likely to accept the latter contrivance as believable.

Phil Redmond, the producer of “Brookside”, doesn’t shy away from the issue, he tackles it head on. It is a consensual incestuous relationship -- Nat and Georgia, the brother and sister BOTH WANT to have sex with one another.

I found this on the Web. “Forbidden Love” Can sex between close relatives ever be acceptable? Johann Hari on the queasy issue of 'consensual incest.’ The Guardian newspaper,  Wednesday 9th January 2002.

“The exponents of incest that we talked to in cyberspace were very keen to draw a distinction between "consensual incest" on the one hand and abuse, rape and paedophilia on the other. Consensual incest, we were told by "JimJim2" from Ontario, is ‘when two adults who just happen to be related get it on. You can't help who you fall in love with, it just happens. I fell in love with my sister and I'm not ashamed ... I only feel sorry for my mom and dad, I wish they could be happy for us. We love each other. It's nothing like some old man who tries to fuck his three-year-old, that's evil and disgusting ... Of course we're consenting, that's the most important thing. We're not fucking perverts. What we have is the most beautiful thing in the world.’”

Email ThisBlogThis!Share to TwitterShare to FacebookShare to Pinterest
Labels: GuestPost