The Escapists by Anthony Beal 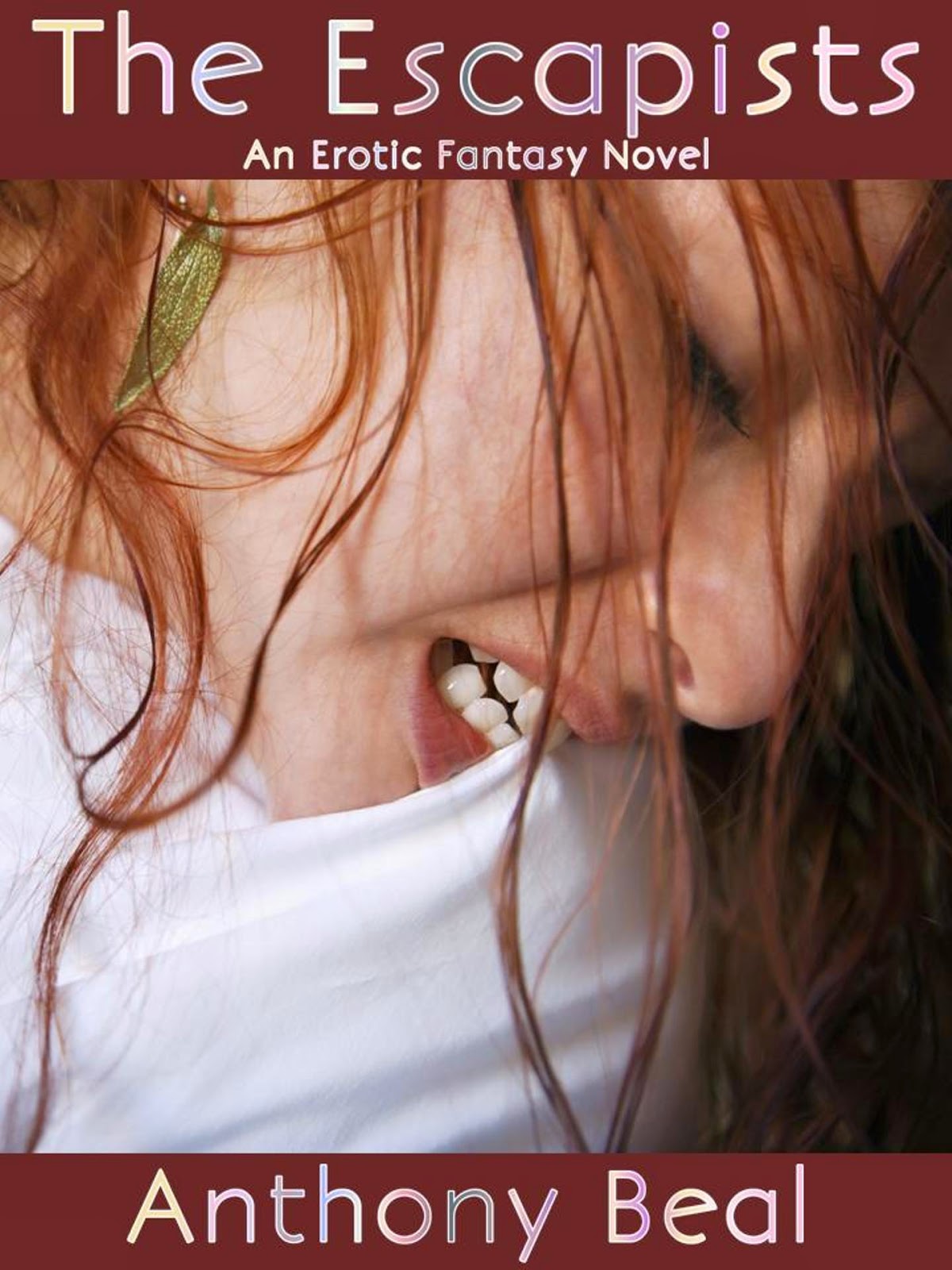 Michael's Synopsis:
Esme is a wealthy woman, but having inherited her wealth, has spent her life futilely chasing some kind of meaning and fulfillment. Reynaldo is a gigolo working at a lush resort in Brazil where the guests' sexual appetites are served as magnificently as their gastronomic ones. The two of them are fated for more than they know, because the island holds a secret—ancient gods and goddess who are intent on resolving long-held disputes through the island’s inhabitants and guests.

Excerpt:
The boy's head of blonde curls rose into view above Esme's uncovered sex and between her upraised knees. From her vantage point, framed between the peaks of her breasts, his straw-colored hair and beaming countenance resembled the sun rising to spill its warmth over a valley oasis and throughout surrounding flesh flatlands.

The beautiful Brazilian youth smiled at her, his expression as coy and delicate as a girl's. Esme restrained herself from uttering as his hot breath sought and found a place to brand his intentions into her flesh. She didn't need to utter, though. Her body language betrayed her; her squirming, the subtle fluttering of eyelids and hardening of nipples attested to his prodigy. Esme wavered between feeling enamored of him and repulsed by him. Often these feelings took her simultaneously, more often than not, during those final seconds of coherence that she enjoyed before the slender youth drew forth her orgasm and reduced her to his whore begging to be soiled, taken any way he pleased. During these times, Esme wished his presence inside her multiplied. She wished for several of him to smile reassurance upon her as his manipulations of her flesh and spirit worked profanities into her body that inevitably sought their emancipation through her mouth.

The boy was infuriating, the condescension in his smiles an ever-present offense, its insult doubled because he reserved its exhibition only for sexual encounters. It angered Esme, who had known the sacrament that was his face touched by sincerity. If his face was her sun, then the genuine smiles he showed to her were its rays, as warming and nourishing to her as ever sunlight had been to a rose. The look in his eyes as he flicked his tongue across her clitoris nourished only her sense of resentment and faint embarrassment over the swiftness of his success in having entrenched himself as firmly under her skin as he had. Esme's disdain turned her eye from his. She felt too much like he was mocking her when he smiled as he currently did. His calmness disconcerted her for how it bordered on detachment. The calmer he remained during their dalliances that so animated her, the larger seemed the slight. That this youth should love her with such skill and yet such aplomb, that he should derive lesser excitement from utterly spending a sexually available older woman than she did from being spent was a more humbling experience than Esme had expected to have on holiday.

Esme cried out as his mouth caressed her twitching sex. The flagellations of his tongue, the tensile brutality of his hard hands, barely restrained when he took her, often restrained not at all, were more assault than she could silently enjoy.

"Stop, stop. Enough," she told him, placing a protesting hand atop his head. Her erogenous places screamed against the act. Esme wanted him inside her. She wanted even more a response from the slender youth. Her legs restless with her unsated lust, Esme twisted away from her lover's tongue, denying its dexterity so advanced for its years the chance to push her any nearer to climax. He filled her heart with exhilarating contempt by pursuing her, climbing onto the table, smiling with every step.

Esme pushed against his chest, her eyes pleading for quarter that she lacked breath to request. She feared what physical mutinies his rough handling might win. The youth dominated her easily, barely exerting himself.

Splayed like an exotic butterfly affixed to an entomologist's display, Esme's every conflicted torment played out upon her face as she felt her sex tingle. Inflamed ardor filled the boy's eyes along with curiosity, with the mocking amusement of a school bully subduing the plain, quiet girl that never talked in class. Esme knew however, and without undue immodesty, that "plain" was something she had never been.

The boy's mouth covered hers with his kiss, drinking Esme at leisure the way a man enjoys aged and expensive spirits after a sumptuous meal. And if sexuality was sustenance, then Esme was a banquet of which his lovemaking suggested he would not soon have his fill. . .

Michael's Review:
"A sensual viscosity defined his movements, like taffy pulled to and fro, a radiant heat that recalled molten things in the way he seemed to flow about when arousal took him, which was often."

This one of the most delightfully written pieces of erotica I have ever read. The author's prose is both meticulous and languid, deliberate yet letting the imagery he calls up do all the work. Sentences like the one I quoted the above litter the book from beginning to end. I kept stopping to marvel at the way these stretches of text were put together.

The storytelling is equally expert. The characters are richly detailed and vivid, and despite the large cast in this book, they all come across as real and believable. I hesitate to say too much about what happens, because this book kept me guessing and turning the pages to the very end.

If I have a criticism, and it seems a crime to even suggest such a thing, it’s that the pedestrian cover gives no hint whatsoever at the delights that lay within. A book this lapidary deserves a better skin.