Not Yet by Adrian Ward 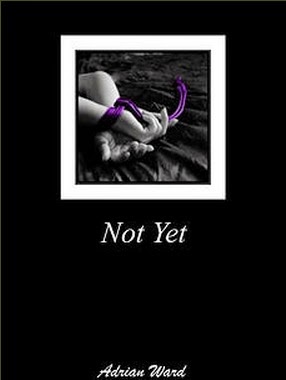 Not Yet is Part One of Adrian Ward's Sean and Allie trilogy.

Michael's Synopsis:
Sean and Allie, husband and wife, are on a business trip and have sex.

Michael's Review:
If you thought I meant to dismiss this story with that thin synopsis, think again. Not Yet is one of those rare pieces of erotica, a rather short story that—despite going very light on the setting and characterization—still manages to pack in a ton of heat. There’s not much to say about this other than that the sex is well done and everything else is kept to a bare minimum. The writing is clean, efficient, and does its job with a minimum of fuss. Definitely worth the price of admission.

Author Interview:
Did you always know you wanted to be a writer?
No. I have always been an analytical type of person, so when I was growing up my pursuits tended more towards math and science. However, I always loved to read and to write; even if it was writing political essays or history research papers, there was always something I enjoyed about taking my thoughts and bringing them to life for someone else to read. So I probably should have clued in sooner, but I didn’t until the last year or so.

What made you want to write erotica?
I’m a very sexual person and not just within the realm of my own fantasies and turn ons. Human sexuality as a whole has long been fascinating to me, even the things that may not arouse me are still interesting to me. Combine that with having read lots of erotica and my desire to write, erotica was a natural fit. My writing allows me to explore that side of myself in ways I normally wouldn’t be able to.

Where do you get your ideas/inspiration for your writing?
I usually get them while driving, which is a fairly inconvenient time to want to write. But it also makes sense in a way. I’m usually so busy that my mind is going nonstop, but when I am driving, music playing in the background, I can just let my mind wander. And when my mind wanders it doesn’t take it too long to turn to sex. Most of the ideas start out as a general concept or a simple fantasy and build out from there when I get a chance to sit down and write.

Do you work with an outline, or just write?
A bit of both. For shorter stories, such as Sean and Allie’s stories, I will usually just sit down and write it.

I have also written a series of four novella length stories (20-30k words), with three more stories planned so far in the series. These I write in a more structured manner. I still don’t use true outlines, but I do plan ahead. I will start with coming up with the general plot of the story, a broad overview of a few sentences. Then I’ll break down the story into parts or scenes and give each one a brief description of what needs to happen in that scene. Over time, as I let the story build in my mind, I may add in new scenes, take out others, or add notes to a scene about something specific that needs to be included. Then when I have time to write, I pick a scene and write that one part -- just letting that scene flow as I write it. I’ve found that writing like this is very helpful since it’s not always easy to find time to write. So this way I can just do one or two scenes in a week if that’s all I have time for and keep making progress without feeling like there’s too much left to be done.

Do you write under a pen name?
Absolutely. As I said before, writing erotica is as much for me to explore my sexuality as it is to share my stories. As such, I prefer to keep clear boundaries between it and the rest of my life. Though I didn’t start out as Adrian Ward.

When I first started writing, I would share my stories on erotica websites using a basic username, not a true pen name. But after getting a lot of positive feedback and encouragement, I decided to begin publishing and went with a variant of John Smith. However, I quickly learned that there were a lot of people publishing under names like J. Smith and more specifically J. D. Smith. In fact there was already someone publishing erotica as J. D. Smith. So then I had to go through the process of changing my pen name on the few stories that I had published so far. Not all retailers are as quick to update though, so for a while some sites had my books listed under Adrian Ward, others listed the author as J. D. Smith, and others would list Adrian Ward as the author but didn’t update the book cover so it still showed J. D. Smith as the author. It was a pain but I’m glad I got it over with early on.

Your thoughts on receiving book reviews - the good and the bad -
The most obvious good is getting your stories out there for more people to see, so that more people are interested in what you have written. But I also look forward to an honest review because it’s nice to know what someone thinks of your work. Reviews and stars on retailer websites are nice, but generally short on feedback. Reviews that go a bit more in depth help you understand more about how readers interpret your writing. I already know what the story should look like in my own imagination, but did my readers envision my characters the way I intended? Did the plot make sense? Along with getting a better idea of how your readers are interpreting your writing, I also think constructive criticism is important for growing and being a better writer.

As for the bad, I think all authors are worried about getting a bad review. But accepting the reality that not everyone will like what you write is part of publishing stories for the whole world to see. I think that’s especially true with erotica. Human sexuality is so varied and complex that what is an amazing, sexy story to one person may be boring or horrid to another. So beyond getting a bad review, I think what would be truly bad is a review that turns away readers who would actually enjoy what your story has to offer, even if the reviewer isn’t one of those people.

What is the hardest and easiest part about being an erotica writer?
For me, the hardest part is simply finding the time to write. As much as I enjoy writing, my life is pretty hectic. There are some weeks where I can work on writing, editing, or publishing everyday. And other weeks where I don’t get time for any of it. It can be frustrating, but its just the way things go sometimes.

The easiest part for me is coming up with ideas. I get ideas for stories faster than I can write them. Though part of that may stem from what is the hardest part for me. If I had more time to write, I may find that I have trouble coming up with good ideas to fill that time.

What is your favorite part of being an author?
I just enjoy exploring a story in my mind and then putting that story into words to share with other people. Even if my writing doesn’t go far at a professional level, just being able to share those stories with others will keep me writing.

Do you have a day job as well?
Yes, one that I happen to enjoy, fortunately enough. It is very analytical though, so it’s nice to have writing as a creative balance to my day job.

What is your favorite thing about being an Indie writer?
Control. I like being in full control of my stories, when and what I write, how and where they are published -- all of it. I can see how a publisher might make it easier to market your books as a new author, but from what I understand its still far from easy starting out even with the backing of a publisher. I think it’s great that self-publishing has really opened the world up for Indie authors.